spider from Michael O’Shaughnessy on Vimeo.

This is my short Spider film.

I use this to discuss Drawing Practice with undergraduates. How repetition Is a fundamental part of drawing memory. My Spider Drawing Machine was developed for a collaborative music and performance event at Liverpool School of Art & Design on Wednesday 2 December 2015.

Molecular was founded in 2010 by Enablers vocalist Pete Simonelli and Lynn Wright of and the Wiremen. Molecular cast of musicians have performed around New York City and Spain. The Liverpool event included Simon Goff (And the Wiremen) on violin, Sam Ospovat (Enablers) on drums, and Algis Kizys (ex-Swans, Of Cabbages and Kings) on bass. Liverpool’s own David Hand performed with his supergroup Bonnacons of Doom.

It’s hardly music that your parents would dance to. But I suppose, it’s not that different from dancing to Agadoo or anything by One Direction.

Spider was played as part of a series of live back drop projections. This version of the film has a Bach Soundtrack. The Goldberg Variations played by Glenn Gould. 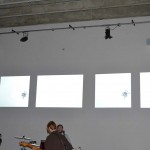 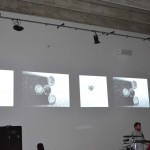